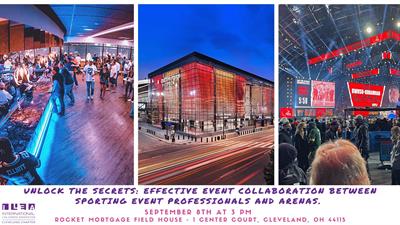 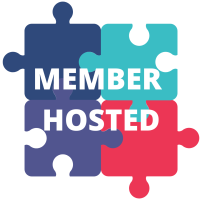 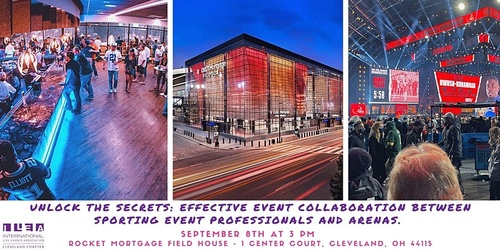 A panel featuring five sports and event management professionals representing sporting and event space across Ohio. The discussion will include topics ranging from bidding opportunities, the impact of citywide sporting events on a city, what they look for in event partners, and the capabilities of their event facilities.

The NFL Draft in Cleveland created $42 million in economic impact on Northeast Ohio in 2021, The MLB All-Star Game provided a $65 million in economic impact in Northeast Ohio in 2019, The 2022 NBA All-Star festivities is estimated will produce an economic impact of $100 million for the region. These numbers for these events do not include the millions of dollars these venues and teams provide the area for concerts, sporting events, conventions, and other private events. Join this panel to find out best practices for working with sports teams and areas as an event professional.

Prior to his current role, Mulhall served as Vice President of Partnerships for Destination Cleveland and was part of the leadership for the sales team at both the Cleveland Indians and Six Flags. He lives in Mentor with his wife, Deb, and has four children.

Michele Powell - Vice President of Event Development for Haslam Sports Group (HSG) after joining the organization in April 2021. Powel is charged with identifying opportunities to attract and host events at all HSG venues, including FirstEnergy Stadium, home of the Cleveland Browns; and the Cross-Country Mortgage Campus in Berea; as well as Lower.com Field, the OhioHealth Performance Center, and Historic Crew Stadium in Columbus.

With an overall emphasis on utilizing the incredible facilities that HSG has to offer, Powell focuses on revenue, community initiatives, and building brand awareness through coordinating major events at these venues, in addition to Browns and Crew games. She also facilitates events of various scales that are inclusive to the diverse communities throughout Northeast Ohio and Columbus, including sports, concerts, and more.

Powell most recently served as Senior Vice President and General Manager of Capital One Arena with Monumental Sports and Entertainment. In her role, she led booking, guest relations, security, event production, operations, and box office services for the venue. Under her leadership, the arena regularly hosted 225 events per year and was home to the Washington Wizards, Washington Capitals, Washington Mystics, Washington Valor, and the Georgetown Hoyas men’s basketball program.

After joining Monumental Sports and Entertainment in 2011 as a booking director, she was promoted to Vice President of Events and Assistant General Manager of Capital One Arena in 2014. Prior to her time at MSE, she spent eight years with Feld Entertainment, the parent company of Ringling Bros. & Barnum & Bailey Circus, Disney On Ice, Monster Jam, and Supercross. She also spent time as the Director of Marketing for the Washington Wizards, heading the team’s branding, marketing, and promotional campaigns.

Additionally, Powell is currently an adjunct faculty member at The George Washington University, where she has taught graduate-level curriculum related to sports and events facility management.

Courtney Fallon - Assistant Director, Events & Experiences at The Cleveland Indians and a native Clevelander born and raised in North Olmsted. She started her career with the Tribe in 2014 in a seasonal role in our Fan Services department while going to John Carroll University. She joined the team in a full-time capacity upon graduation in 2016 as the team was heading to post-season. Courtney began to learn events quickly as we were responsible for post-season hospitality. She has served as the club’s 2019 All-Star Game Hospitality coordinator which was an unreal experience!!

In her current role, Courtney oversees the logistics, planning, service/ execution, and internal communication for all events at Progressive Field. With a focus on Season Ticket Holder and Corporate Partnership hospitality and overseeing a team that handles all logistics of events in the facility, including the calendar, as well as coordinating special experiences on gamedays.

Bockelman came to Rocket Mortgage FieldHouse in 2019 from Columbus, OH where she served as Director of Booking for Columbus Arena Sports & Entertainment (CASE), the organization responsible for handling events for Nationwide Arena, the Schottenstein Center, and Ohio Stadium. Since coming to Cleveland, Bockelman has secured bookings for highly sought shows including Celine Dion, Carrie Underwood, The Lumineers, Tool, Foo Fighters, and Rage Against the Machine. She also played a central role in the grand re-opening of the FieldHouse after its $185 million Transformation.

Bockelman’s accomplishments span beyond the workplace. In 2013, she established the Michael Belkin Scholarship at The Ohio State University, her alma mater, to send students to Pollstar Live!, the world’s largest gathering of live entertainment professionals. In 2016, she was inducted into the International Association of Venue Managers’ (IAVM) 30 Under 30 Club and in 2020 was recognized by VenuesNow as a Generation Next honoree.

Bockelman graduated from The Ohio State University with a Bachelor of Arts with Honors in Political Science and African-American and African Studies. She studied abroad in South Africa, Lesotho, Zambia, Botswana, Namibia, and Zimbabwe as part of a cultural education program.

Moderated By: Esha Hand, Manager of Events for the City of Cleveland and ILEA Cleveland Director of Special Projects for the 2021-2022 Board Year.

Included in your ticket price will be a delicious appetizer spread where you can savor the tastes, textures, and aromas of the food prepared with the freshest seasonal ingredients all while enjoying some amazing education and networking opportunities.

This event is open to both members and non-members both In Person and Virtual. Doors open at 3 pm for in-person networking with appetizers and soft drinks included in the in-person ticket price. Our Educational portion of the event will begin at 3:20 pm with Q&A and additional networking at the conclusion of the event.

ILEA Members Only Benefit will be a special private Q&A and Introductions session with the panel at the conclusion of the event and after the public Q&A session.

After the event join us at Wonder Bar for after-event cocktails and networking.

* Event sponsors will be updated as additional sponsors come on board. Interested in being a sponsor contact Ryan Harmon at ryan@lirents.net